Understanding Migraines: The Difference Between Cause and Triggers

The term “migraines” and headaches are used interchangeably these days, but the reality is just about every headache is some form of migraine, so when we talk about migraines, it’s not just the aura-producing monster that leaves you calling in to work to seek out a dark room and a forehead wash cloth. It’s also the nagging head throb that hits you at weird times of the day (or all day) for seemingly no reason. It’s the sharp pain in the front of the head, or the back of the head, or the side of the head—wherever! These are all migraines and at Palencia Dental in St. Augustine, Dr. Stephanie Kinsey believes you shouldn’t have to suffer through them.

We get it. We’ve had migraines, and we know what you’re going through. It can be a brutal, life-changing experience that touches every part of your existence from your work life to your home life to recreation. You can feel like you’re not able to enjoy life to the fullest because of the constant throb, dull ache, or all-out assault that migraines present. We’re here to help. 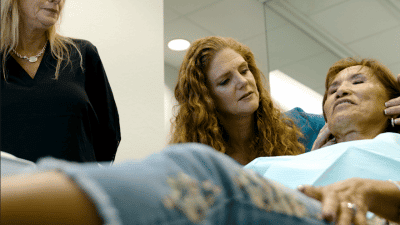 Migraines St. Augustine, The Cause

When people think about migraines the first thing that typically comes to mind (if you are even able to concentrate at all with a migraine) is pain killers. That’s the immediate remedy, but like most immediate remedies, it’s very temporary. And worse yet, it typically gets to the point where over-the-counter pain killers won’t even touch a mid-level migraine, much less a four-alarm migraine. So, the next thing is to eliminate environmental causes. Some people swear coffee triggers their migraines, and some people say it wards them off. Some people think allergies are to blame, and some think it comes down to sleep. Still others think it’s all about computer posture or lack of sleep.

Sound familiar? If you’ve been trying to nail down the cause of your migraines for any period of time without success, you need to read on.

The true cause of migraines is almost always deeper than environmental factors. Environmental factors like food and allergies are called triggers for a reason—because they trigger your migraine but they don’t cause it. Instead, the problem often lies with imbalances in the head and neck area. Everything needs to be in symmetry, and when it isn’t, the TMJ joint where the jaw connects to the skull will start to act up. When that happens, all sorts of issues arise like dizziness, brain fog, pain—and you guessed it—migraines. The effect that this joint has on the surrounding areas cannot be understated.

The solution for migraines lies in fixing these imbalances with one or more simple procedures. The process starts with an assessment that includes a painless head scan. The scan will tell us where the imbalances are causing issues, then Dr. Stephanie Kinsey will use one or more types of treatments to make corrections. Sometimes it’s as simple as muscle stimulation therapy to balance out the strength of your jaw from side to side. Whether the solution is simple or more involved, at Palencia Dental we take a scientific approach that removes the guesswork for migraine treatment. Dr. Kinsey specializes in migraine treatments and has cured migraines that patients had dealt with for decades. The whole process is comfortable, caring and customized to treat you as an individual.

If you’re tired of living your life around the obstacles that migraines put in your way, don’t hesitate to call (904) 474-5444 and talk with our dental office in St. Augustine, FL today to book an appointment with Dr. Kinsey. With the help of Palencia Dental, the process of living a migraine-free life is easier than you may think.